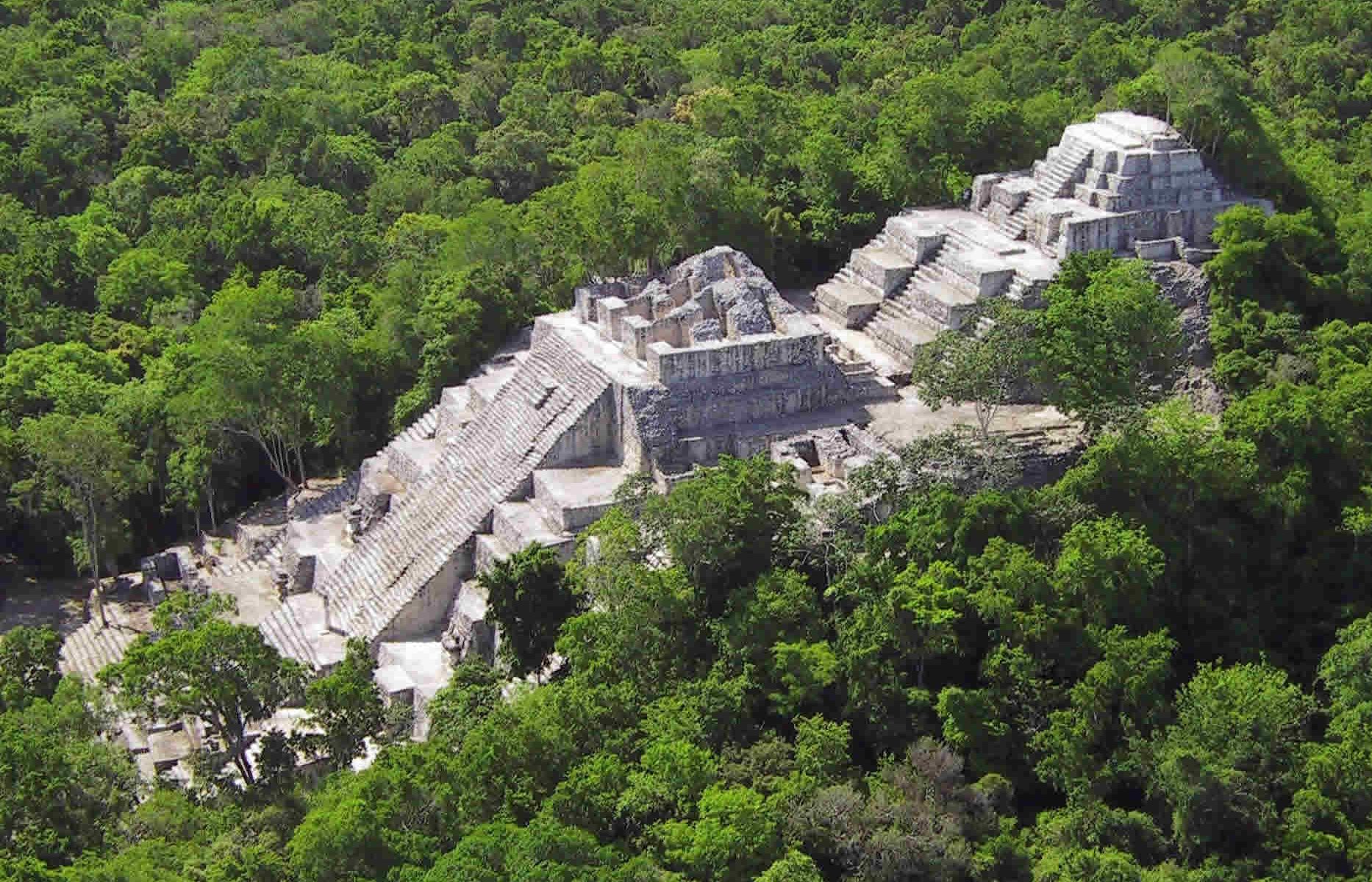 After almost a year and very diligent work by the Centro INAH and Campeche to push the repair of the entrance road through Conhuas and the Biosphere, the archeaological zone of Calakmul re-opened on December 5! This means that Southern Campeche now has more ruins open than anywhere else in Mexico! Calakmul, Xpuhil, Balamku and Hormiguero are all open, promising an uncrowded view of the greatest Classic, Rio Bec and Chenes style ruins in Campeche. You will need at least three days to see everything that is open.

Calakmul’s hours are the same, from 8am to 5pm. Visitors will be asked to use hand sanitizer, wear masks, respect safe distances, etc.

The biggest challenge will be the new limit on the number of simultaneous visitors to the park: 100 visitors at a time will be allowed into the area. Get there early (at 8 or 9 am) and avoid any restrictions. This actually would have been a minor restriction in the past – Calakmul doesn’t receive that many visitors. Our advice to you is to hire a guide. Certain features in the park may still be off-limits as work continues after a year’s closure but a guide may give you more access to climb, explore, photograph, etc.

Our Jungalows and Cabanas have been maintained during the down period and our excellent, original restaurant is open for breakfast, dinner and packed lunches. We have taken advantage of the down time to do lots of renovations, not only to give our staff income, but to be sure that when we re-opened all would be as before – great!

Our restaurant, credited for many years for great food and service, has always been spotlessly clean. We have always ensured diners’ privacy: in fact, we have 4 onsite dining locations, so guests can choose to eat as close to or as far apart as they want from other guests.

Campeche is one of the few states that has a “green” traffic light – probably because the lockdown was so severe here over the past half year. We still take every precaution in the living areas, kitchen and dining areas. Our staff has remained healthy throughout the year, for which we are grateful.

We are so happy to welcome you back to the best area to see Maya ruins and nature in one place: the Calakmul Biosphere!

Three Other Ruins & The Bat Cave Are also Open!

The Bat Cave is open again too! Please contact us for more information on restrictions and guide info. 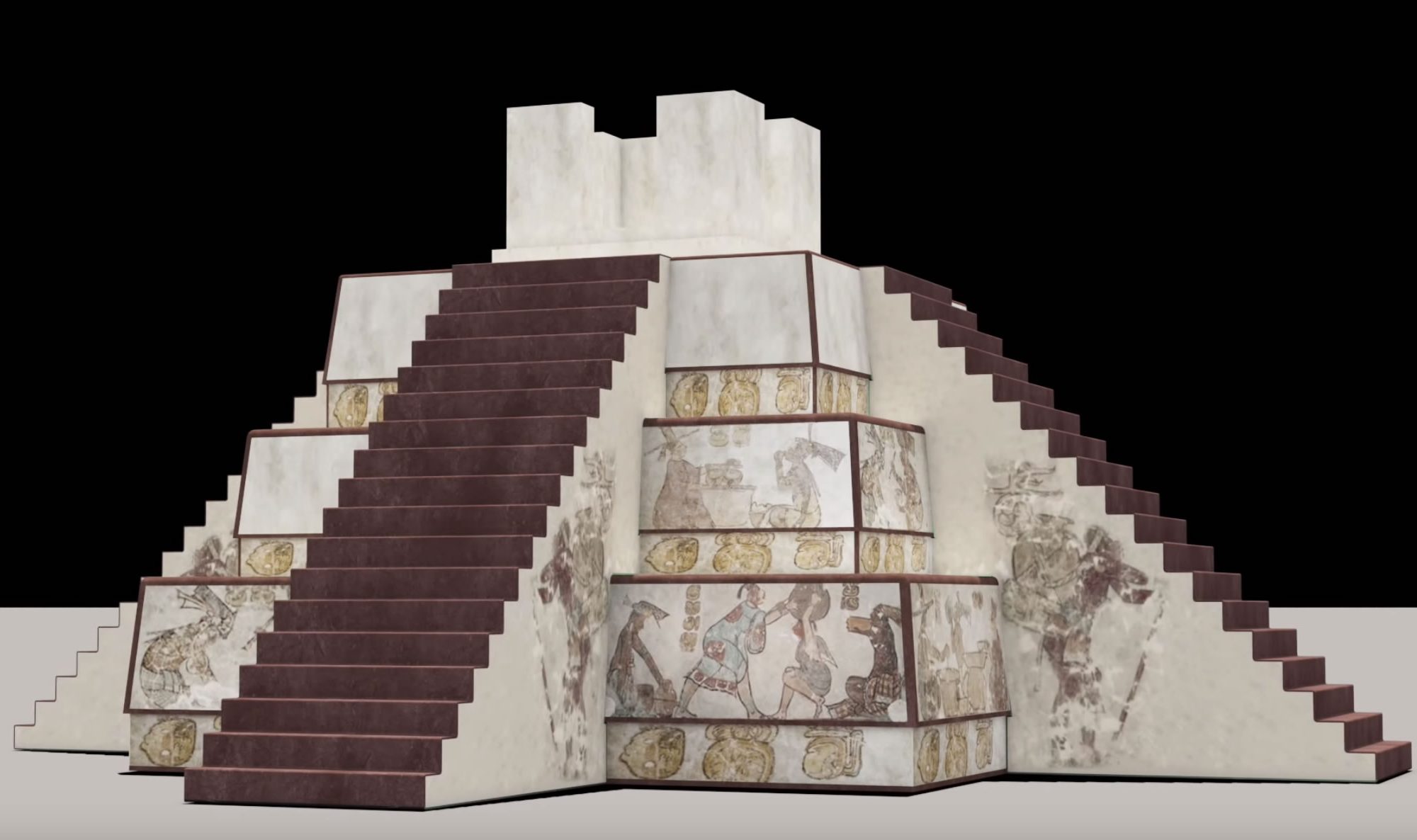 The Enigmatic Calakmul. The Ancient Reign Of The Kaan.

A video from the Instituto Nacional de Antropología e Historia featuring drone overviews, integrated 3D reconstructions and the best views so far of the interiors of Structure II and the Painted Pyramid.

The video is in Spanish but you can set YouTube to autotranslate to your language through the settings button at the bottom of the video. Go to “Subtitles” and check the Spanish selection, then re-open “Subtitles”, check “Autotranslate” and find your language. 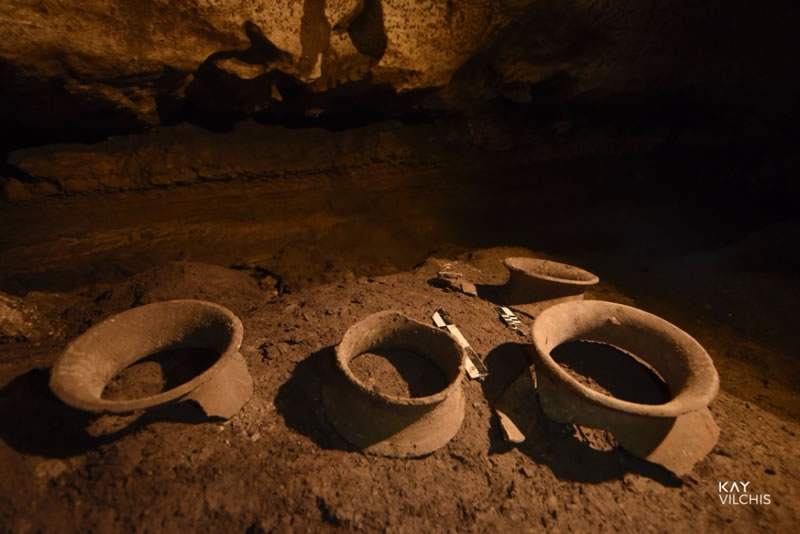 Underwater archaeologist Helena Barba Meinecke recently announced the discovery of a “corridor” of caverns beneath Calakmul, containing evidence of ancient ritual use, including ceramics, cave paintings and human remains: “There are even places in the depths of these caverns where the Maya performed their sacred rituals and sacrifices.” Barba is head of the Subdirección de Arqueología Subacuática de la Península de Yucatán del Instituto Nacional de Antropología e Historia (INAH). The Circulo Espeleologico del Mayab has been exploring the caves for a year in secret. Official publication is due some time this year.

A few photos were released to the Jornada Maya in December.

The caves are extensive and of a still unknown size. Their exact location is also a secret, to prevent looters from gaining access to what is still a new and largely undocumented discovery. These caves may never be open to the public but they will eventually become part of the bigger picture of the development of Calakmul.

The discovery of caves in the Calakmul area isn’t new. There are a few famous cenotes in the Calakmul Biosphere Reserve, such as the “Bat Cenote” or “Bat Volcano” near Conhuas, as well as the “Dormitorio de los Monos” near km 38 of the entrance road, a cenote filled with tall trees used as shelter each night by both spider and howler monkeys.

In 1985, Abel Morales Lopez of the Proyecto Calakmul performed an emergency survey of sites along the final path of the proposed entrance road. Within a hundred meters of the road and its parallel drainage, he discovered and mapped 23 sites with plaza groups, many vaulted buildings and even pyramids of up to 13 meters in height, emphasizing the famous density of occupation of the hundreds of square kilometers surrounding the center of Calakmul.

Two of these sites featured sacred caves, including this one at about kilometer 31: 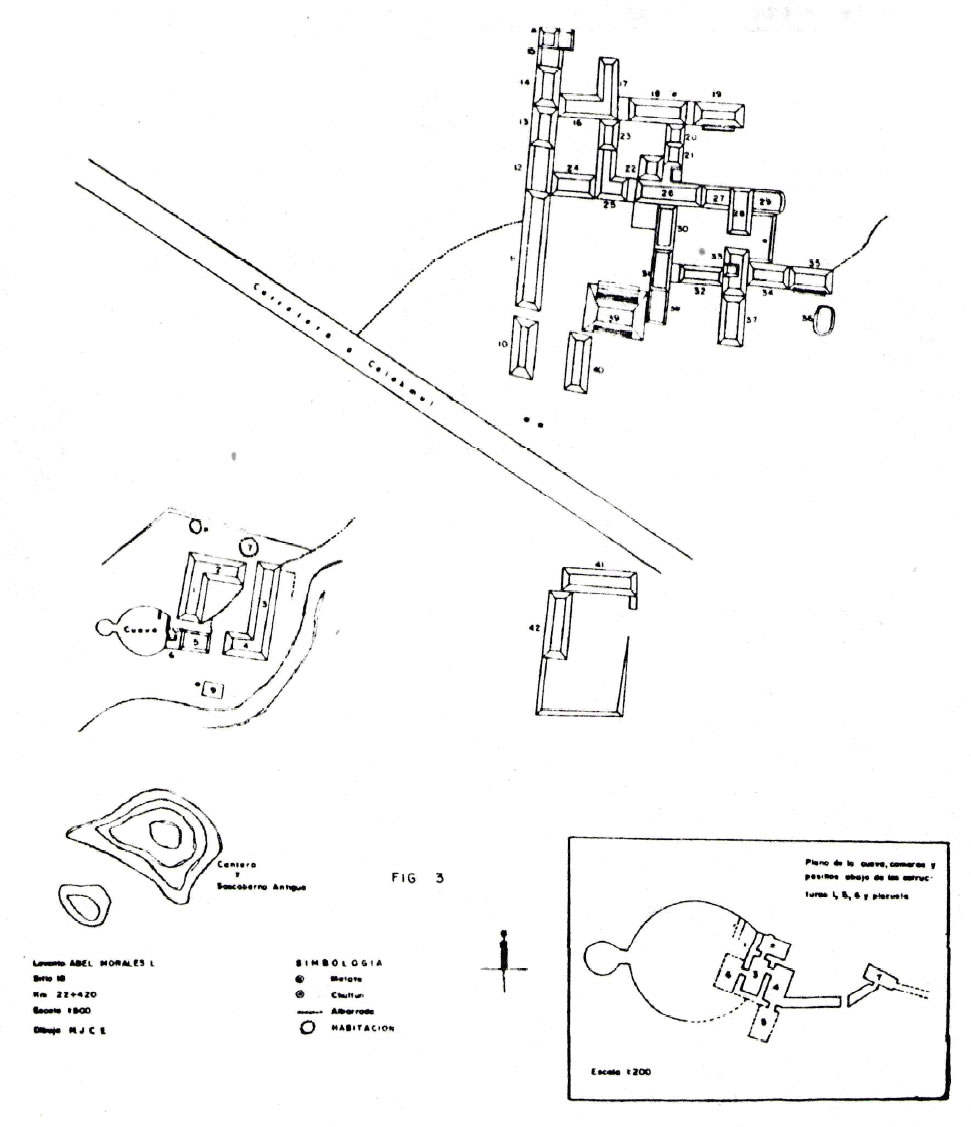 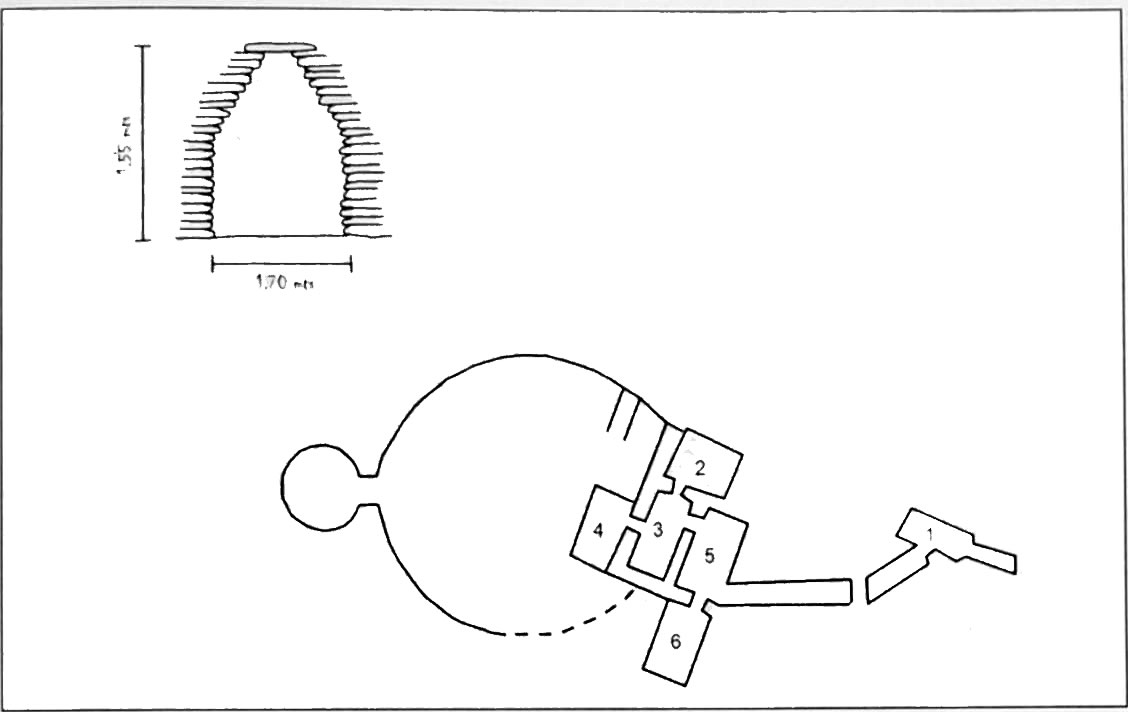 The Maya actually built vaulted chambers within this cenote, which the archaeologist thinks may have been dedicated to funerary rites.

The water table is much lower at the base of the Yucatan than it is within the more famous cenotes of the East Coast (Tulum, Tankah, etc.). As a result, there could hundreds of kilometers of interconnected dry caves criss-crossing the Biosphere. Water would have been the sacred element in these caves, its presence recalling the watery underworld and its gods. These caves may also have been visited in the dry season for basic drinking water.

There has been little exploration of Calakmul’s outer “suburbs” since the initial survey of Folan’s Projecto Calakmul, but intensive excavation has begun at the larger “satellite” sites of Uxul and Oxpemul, with more to come.

Barba Meinecke is also the director of the new underwater archaeology museum, featuring a sunken recreation of a Spanish shipwreck off Playa Bonita in Lerma, near Campeche City. The fortress of San Jose el Alto will exhibit discoveries from cenotes, such as prehistoric mammal bones and Maya ceremonial ceramics, in addition to items recovered from shipwrecks of the Colonial and Industrial eras. The skeleton of “Naia”, the oldest woman of the Americas who was discovered in “The Pit” at Sistema Sac Actun in Tulum, will find her resting place here. The underwater shipwreck exhibit has already been installed and the main museum is expected to be open this year.