Every evening just before twilight, like clockwork, cars turn into a small unmarked opening on the highway at km 105.8. Police watch traffic and wave them in. The cars jockey into the few parking spots, then their occupants march uphill between stones obviously salvaged from one of the more than 6000 structures of greater Calakmul , across the highway. At the top of the trail, people fan out around the collar of a cavernous dry cenote and look down.

At the bottom of this natural well, like clockwork, tiny shapes appear and begin to flutter in a circle around the limestone walls. More join them in tight clockwise spirals that rise up and lap the bats in lower spirals. Soon, the best word to describe the rising, darting mass is “vortex”. More bats pour out of the cave. The vortex explodes. The black mass reaches the lip of the canopy of trees 100 meters abve, and the “volcan de los murcielagos” breaks looses, sending streams of bats out over the jungle – 3 million of them in all, every night. Streaming rafts of bats head south, west, east, floating over the highway and out of sight. 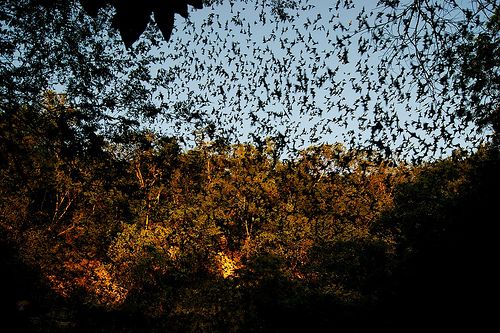 At the end of the show, the spirals break down and here and there lone bats will tip over the lip of the cenote, and fly between the standing onlookers and off into the jungle behind them. Soon, together, people and bats will pass along the forest path and between the trees toward the highway, as darkness finally falls.

8 species of bats – 7 fructivoes and 1 insectivore – live together in this cave, one of the top three caves in the world for bat biodiversity. The cenote is 600 meters deep; at 400 meters, water enters, a steady source for thirsty bats, back from the hunt.

This show takes place every night throughout the year, in every kind of weather. It is guaranteed amazement. It’s free. It’s one of the natural wonders of Mexico, if not the world.

Rio Bec Dreams Is Only 20 Minutes Away!

Come see it for yourself! Most of our guests make time to drop by the Bat Cenote at twilight, concluding a day of adventure with a rare experience. Then they pop back to the hotel for dinner.

And consider: The emblem glyph of Calakmul (and nearby Oxpemul), both before and after the time of the Snake Lords … was a Bat.